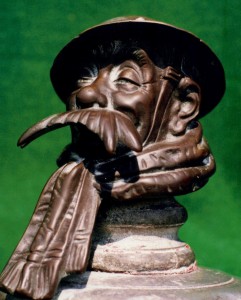 Bruce Bairnsfather was officially appointed British Officer Cartoonist.  To many he became the ‘Man who won the 1914/18 War’.  He created the best known cartoon character of the First World War – ‘Old Bill’, and became world famous for his cartoon captioned, ‘Well if you knows of a better ‘ole, go to it’.  His work can be found on plates, ashtrays and memorabilia.  A southern showland family have owned a bronze mascot of ‘Old Bill’ since it became available on the 9th. May 1919.  This mascot has adorned many a radiator cap on their transport over the years, and is pictured here on the firms’ Scammell Highwayman tractor.  Any yes – ‘Old Bill’ STILL rides to the fairgrounds.