G.W Ferris died in poverty three years after this Giant Wheel was completed. The attraction was pulled down in 1903 and moved to the Louisiana Purchase Expo. in St. Louis and re-opened in 1904.  Finally on May 11, 1906 this Giant Wheel was demolished by a 200lb. charge of dynamite.  The name ”Ferris Wheel” is still used today.

Pulled down for scrap in October 1928. Passenger cars sold for GBP20.

Built to commemorate the 50th. Anniversary of Austrian Emperor Franz Joseph’s ascension to the throne.

Famous landmark used as a location during the filming of the motion picture ”The Third Man”. Still in operation today with only 15 cars.

Pulled down in 1920. The passenger cars were used as temporary homes for some of the First World War homeless.

In 1896 there had been plans for a Giant Pleasure Wheel at New Brighton (UK), with James Weir Graydon as Proposer & Engineer (US Inventor and holder of a British Giant Wheel patent). Walter B. Bassett claimed that on 10/8/95 he had reached an agreement with Graydon that gave Bassett the exclusive rights to use the Graydon patents to build Giant Pleasure Wheels in the UK. Graydon filed a countersuit against Bassett for financial damages, due to the construction delay. This was dismissed by the Court. By this time Bassett had completed the Giant Wheels in Blackpool, Vienna and Paris, and the New Brighton project was scrapped. Bassett died nine years later on 25/5/07 at Watermouth, and was by then virtually penniless.
Intellectual Rights & Images are Copyright of the EAI Picture Library

Library images were chosen for the music CD inserts of the Red House Painters album featuring the track Roller Coaster. The Red House Painters (an Alternative Rock Group) were formed in San Francisco by singer-songwriter Mark Kozelek. These three images are composites from Library images originated in Lancashire (UK), Dorset (UK), and along the eastern seaboard of the USA.

Not Forgotten (includes link to movie)

The animal mounts from Ashleys’ 1934 Lakin Noah’s Ark ride went into storage in the early 1960’s, when the ride was converted to a Waltzer. However they made an improptu appearance in 1994 for a photo shoot. Soon after they were sold and have remained in storage. A special thank you to Michael Smith at The Fairground Heritage Centre, Milford, Lifton, Cornwall, END_OF_DOCUMENT_TOKEN_TO_BE_REPLACED

The Indian Scout 101 motorcycle (1928-1932) was revered by Wall of Death riders as the ideal machine for trick riding. This American made motorcycle was a beautiful blend of weight and design and was also loved by the police. The Indian Scout had been around since 1920, but END_OF_DOCUMENT_TOKEN_TO_BE_REPLACED 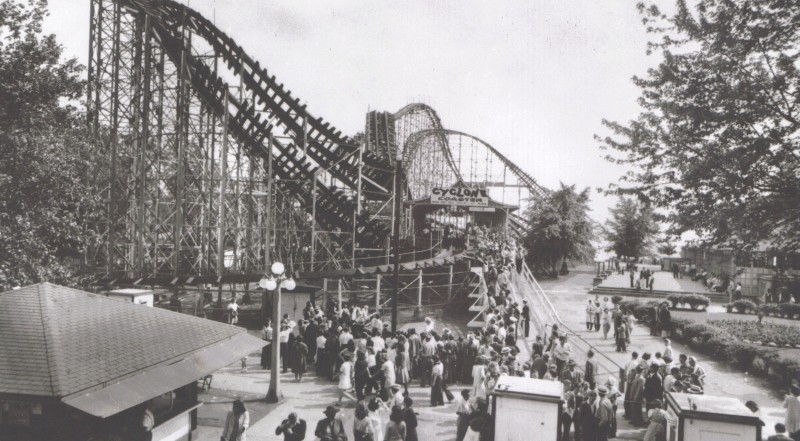 The most EXTREME Roller Coaster Ride – EVER 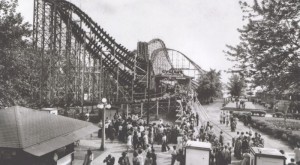 On a scale of 1 – 10 (where 10 is EXTREME FEAR), this ride was awarded a 10 – the most frightening roller coaster ever built. The Cyclone Coaster (1927 – 1946) at Crystal Beach Park, Ontario, Canada was the purveyor of this EXTREME FEAR. Designed by Harry G. Traver (The Master of Terror), this gravity ride featured (unusually) a steel superstructure to support the END_OF_DOCUMENT_TOKEN_TO_BE_REPLACED

Equal to a Band of 50 Musicians

In 1901 the organ was presented to the public by Alderman P. Collins on his double wagon front Bioscope Show (cinematograph) – formerly Wall’s Ghost Show.

A host of images featuring animals from an early Noah’s Ark attraction have mysteriously surfaced after nearly twenty years. Following years in storage aboard the Ark trailer, all the animal mounts were off-loaded in the early nineties and individually photographed in a makeshift studio. Five rolls of film (ninety-nine negatives) were shot over a period of six hours. This was the last time these mounts were ever seen together in showland. Within days the negatives and prints had both disappeared into thin air. A movie may now be produced to celebrate their return into showland hands.

And so it came to pass –

COMPLETE Build-Up of this Vintage Slip (includes link to movie)

Charles Drakeleys’ Helter Skelter (Lighthouse Slip) was built in 1914 by Messrs. Griffiths & Morgan of Shepherds Bush, London. The attraction is 15m high, with a ground footprint of 9.5m in diameter. This is the last wooden example still travelling. The ride was re-decorated in 1995 by Susan Banner.
The 100 images which make up this movie slideshow were captured on END_OF_DOCUMENT_TOKEN_TO_BE_REPLACED